The Grameen Foundation and Crédit Agricole CIB team up to promote access to financial services for as many as possible, in a bid to encourage the development of revenue-generating businesses. 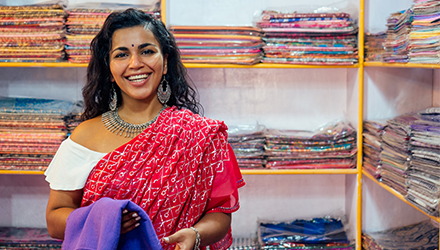 The Crédit Agricole Grameen Foundation and Crédit Agricole CIB are teaming up to aid and fund Indian microfinance institutions supporting the business plans of populations excluded from the traditional banking system.

Through this partnership, Crédit Agricole Group is putting its expertise to work for inclusive finance in India, and has earmarked funding of €12 million to that end.

Crédit Agricole CIB will be granting loans of up to €12 million total in euro-equivalent local currencies to Indian microfinance institutions, under the guarantee and oversight of the Crédit Agricole Grameen Foundation.

The Foundation will be responsible for originating, examining and monitoring funding applications. The loans granted to Indian microfinance institutions will be used to promote access to financial services for as many as possible, in a bid to encourage the development of revenue-generating businesses. Rural populations and female entrepreneurs will be the primary beneficiaries.

This partnership underscores Credit Agricole CIB’s commitment to supporting inclusive finance in India. “The complementarity of our expertise played an optimal role in this partnership, with the Foundation contributing its keen understanding of microfinance issues and the Crédit Agricole CIB Indian branches their tried and tested knowledge of complex and ever-changing local banking regulations,” explained Emmanuel Bouvier d’Yvoire, Senior Country Officer of Crédit Agricole CIB for India. Operating in India since 1981, Crédit Agricole CIB is established in Bangalore, Chennai, Delhi, Mumbai and Pune.

“Alongside Crédit Agricole CIB, we support institutions that work to promote the development of rural economies in India. This cooperation showcases the Group’s commitment to acting each and every day in the bests interests of society”, added Eric Campos, Chief Executive Officer and Head of CSR for Crédit Agricole S.A. This is a great opportunity for the Foundation to work in India, where microfinance is highly developed but the challenge of financial exclusion has yet to be overcome.

The very first loan under the partnership, for INR 5 million, fully secured by the Foundation, was granted to Indian firm Fusion Microfinance. The institution offers financial products and services to more than 1,254,007 women, predominantly in rural areas (86%), who make up its entire customer base. Fusion Microfinance has a portfolio of €237 million and operates in 17 Indian States with a network of 440 branches and 3,695 employees.