Crédit Agricole CIB is pleased to announce the appointment of Franck Passillier as Senior Country Officer for India, effective today.

Crédit Agricole CIB has been present in India since 1981 and is located in Mumbai, Bangalore, Chennai, Delhi and Pune. The Bank offers a comprehensive range of products and services, tailored to the needs of large local companies as well as multinational corporates and financial institutions based in India. It is amongst the major foreign banks in India, specialising in fixed income, export and trade finance, project finance and acquisition finance.

As Senior Country Officer, Franck Passillier will continue to drive the Bank strategy for India, sustaining the strong momentum of the franchise. Based in Mumbai, Franck reports to Michel Roy, Senior Regional Officer for Asia-Pacific.

Michel Roy, Senior Regional Officer for Asia-Pacific, commented on the appointment: “As the region’s third largest economy, India presents strong growth potential for the Bank as we strive to expand our market share in the region. Franck’s strong leadership and banking experience will be instrumental to delivering on those ambitions.”. 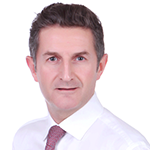 Franck Passillier joined Crédit Agricole Group in 1999, first in the Export Finance team in Paris covering Middle East and Central Asia and then, in the Structured Commodity Finance team in London, covering Africa. He then held multiple leadership roles at Crédit Agricole CIB, including Head of Export Finance for Asia-Pacific in Singapore and Head of International Banking and Structured Finance for India, stationed in Mumbai. His stint in India from 2007 to 2010 equipped him with a sound knowledge of the local banking sector and business environment.
In 2017, Franck became Chief Representative Officer for Crédit Agricole CIB Indonesia, when the Representative office was created in Jakarta.