Crédit Agricole CIB: one of the world's leaders in air transportation and rail financing

With over 40 years experience, Crédit Agricole CIB gives preference to lasting relationships with its customers. The expertise of its teams is recognised worldwide in the air and rail transportation markets.

Active for over 40 years in this area, Crédit Agricole CIB is one of the world leaders in aircraft and rail finance. The Bank finances aircraft (passenger and cargo airplanes including spare engines, business jets) and trains. It offers its customers (airlines, aircraft, engine  or rail lessors, individual owners) a broad range of products and expertise in cooperation with Crédit Agricole CIB’s various product lines.

The Aviation sector is an integrated worldwide business line with teams in Paris, New York, Hong Kong and Tokyo. Specialised in air transportation, these teams are organised on a one stop shop basis, i.e. each client is followed by a Senior Banker in charge of a customer portfolio who centralises all the services.

*UKEF: The UK Export Finance is the United Kingdom's Export Credit Agency (ECA). It reports through to the Department for Business, Energy and Industrial Strategy (BEIS). The UKEF derives its powers from the 1991 Export and Investment Guarantees Act and undertakes its activities in accordance with a specific consent from HM Treasury. 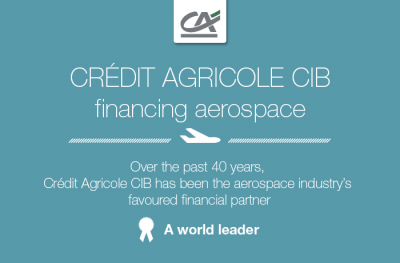