Crédit Agricole CIB is pleased to announce that Yves-Marie Gayet, in addition to his current role as Senior Country Officer for Brazil, is appointed Head of Latin America effective 1st May 2021.

Yves-Marie Gayet, in addition to his current role as Senior Country Officer for Brazil, is appointed Head of Latin America effective 1st May 2021. Based in Brazil, Yves-Marie will report to Marc-André Poirier, Senior Regional Officer for the Americas.

In his new role, his main remit will be to further expand and strengthen our client franchise in Latin America where Crédit Agricole CIB has had a presence for many years.

The representatives for Argentina, Chile, Colombia and Mexico will report to him. 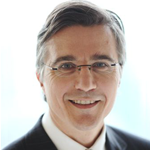 Yves-Marie has been with Crédit Agricole CIB since 2019 and brings over 25 years of experience within the banking industry.

He started his career at Société Générale in Paris where he worked at the “Group’s Inspection Générale” for six years. Thereafter he held various management positions in Société Générale Corporate and Investment Bank in London over a period of 15 years: he was Deputy and then Global Head of a Structured Finance business line from 1997 to 2008, followed by a role as Deputy Global Head of Commodities markets from 2008 to 2012. In 2012, Yves-Marie was appointed Executive Director of the French Chamber of Commerce in Brazil, while continuing to perform consulting activities for a number of large European clients prior to joining Crédit Agricole CIB in 2019.