Crédit Agricole CIB is pleased to announce the appointment of Xavier Roux as Chief Representative Officer for Indonesia, effective today.

In his new capacity, Xavier Roux will continue to develop the Bank’s relationship with its local clients and further identify business opportunities in the country. Stationed in Jakarta, Xavier reports to Michel Roy, Senior Regional Officer for Asia-Pacific.

Michel Roy, Senior Regional Officer for Asia-Pacific, commented on the appointment: “Xavier’s solid leadership experience and robust business acumen will be a vital asset for the Bank as we strive to support both our local and multinational clients in Indonesia through our international network and offshore offerings.” 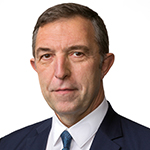 Xavier started working with the Crédit Agricole Group in New York in the Merger & Acquisitions department and has since held various roles in the Bank, including Chief Executive Officer, Hong Kong and Head of Corporate and Specialised Finance for Asia-Pacific. From 2007 to 2014, he was Senior Country Officer for China with the mission to set up the banking subsidiary. He then became the Bank’s Senior Country Officer for Canada, an entity which became a full branch under his leadership, before taking up the newly appointed role.