Pierre Dulon is appointed Deputy General Manager of Crédit Agricole CIB as of April 1st, 2021. He supervises IT, Operations, Real Estate and the Chief Operating Officers of the international network, and keeps supervision of Azqore for which he had been General Manager since 2018. He becomes a member of the Executive Management of Crédit Agricole CIB. 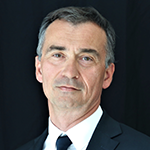 Pierre Dulon started his career at Orange in 1990 with commercial development positions. He joined Crédit Lyonnais in 1998 to manage the outsourcing of the Group’s Telecom business. After working on the e-business transformation of the bank, he pursued his career in IT in 2001.

He joined Calyon (which then became Crédit Agricole CIB) as Head of the International Technology and Systems Department in 2003, and became Head of the Data Processing Department in 2005. In 2009, he was appointed Head of Global IT. He joined Indosuez Wealth Management and took over the management of Crédit Agricole Private Banking Services in 2015. He then led the transformation of this entity to create Azqore in 2018, becoming its Chief Executive Officer.

Pierre Dulon is a graduate of Ecole Polytechnique and Telecom Paris Tech.