Frank Drouet is appointed as the Deputy Head of the Global Markets Division, effective 28 June 2021.

“We are delighted to welcome Frank to Crédit Agricole CIB. As our market activities continue to grow, Frank will be instrumental in helping us achieve our ambitious objectives.” commented Pierre Gay, Head of the Global Markets Division and Deputy CEO. 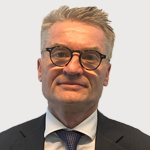 Frank brings extensive experience and a broad and deep knowledge of the capital markets, gained both in France and internationally. He joined Société Générale Group in 1990 initially as a trader, and held various positions in Equities & Derivatives in both Europe and Asia Pacific. In 2009 Frank was named first Deputy Head, and then in 2012 Head of Global Markets for Asia Pacific, based in Hong Kong. In 2016 he was appointed Head of Global Markets, based in Paris.