Danielle Baron is appointed Global Head of Structured Finance. She reports to Jean-François Balaÿ, Deputy Chief Executive Officer of Crédit Agricole CIB and becomes a member of the Management Committee of the Bank. She was previously Global Head of Power & Utilities. 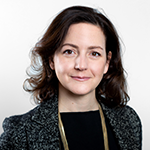 Danielle Baron has more than 25 years of experience in the banking industry. She started her career in 1994 at US EX-IM Bank in Washington as a Project Analyst. Thereafter she joined ANZ Investment Bank, where she held various positions in Structured Finance in Hanoi, Melbourne and London, covering Power, Utilities & Infrastructure sectors. She joined HSBC in 2005, focusing on Infrastructure Structured Finance in continental Europe and Latin America. She joined the Power team of Crédit Agricole CIB London in 2009, where she led various advisory and arranging mandates in Europe and the Middle East. In 2012, she was appointed Head of Energy & Infrastructure for Latin America based in New York, then Global Head of Power & Utilities in Paris three years later.

Danielle Baron holds a Bachelor of Science from Tufts University.