Jacques Ripoll, Deputy General Manager of Crédit Agricole S.A., in charge of the Large Clients Division, has decided to give a new direction to his professional life, after a long career in the banking sector. He will join, as a Partner, Eren Group, the leading player dedicated to the natural resources economy and one of the European leaders in the energy transition. He will leave Crédit Agricole on 1st September, 2022.

Philippe Brassac, Xavier Musca, and the Executive Committee of Crédit Agricole S.A., warmly thank Jacques Ripoll for the strong development and transformation momentum he has given to the entities under his responsibility. They wish him every success in his new career. 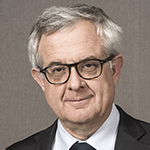 Xavier Musca began his career at the General Finance Inspectorate in 1985. In 1989, he joined the Treasury Directorate and was appointed Head of the European Affairs Bureau in 1990. In 1993, he became technical advisor to Prime Minister Edouard Balladur before moving back to the Treasury in 1995, first as Head of the Financial Market Bureau, then as Deputy Director for Europe in charge of Monetary and International Affairs (1996) and finally Director of the State and Economy Financing Department (2000). From 2002 to 2004, Xavier Musca was Principal Private Secretary to the Minister for the Economy, Finance and Industry, Francis Mer. In 2004, he was appointed Director of the Treasury. In this capacity, he chaired the Paris Club and the Economic and Financial Committee of the European Union, composed of senior officials from Europe’s national administrations and central banks. He left the Treasury on 26 February 2009, to join the Office of the French President as Deputy Secretary General in charge of economic affairs. On 27 February 2011, he was appointed Secretary General of the President’s Office. In 2012, Xavier Musca was appointed Deputy Chief Executive Officer of Crédit Agricole S.A..

Xavier Musca is a graduate of Sciences Po Paris and the Ecole Nationale d’Administration (1983/1985).

He is Officer of the Legion of Honour, Knight of the National Order of Merit, the Order of Agricultural Merit as well as the Order of Carlos III (Spain).