Stéphane Ducroizet is appointed Head of Risk and Permanent Control

On July 31st, the Board of Directors of Crédit Agricole CIB ratified the appointment of Stéphane Ducroizet as Head of Risk and Permanent Control, effective September 1st, 2019. 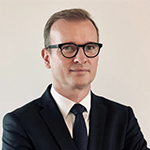 Stéphane Ducroizet began his career at Crédit Lyonnais’ Corporate Banking groups in Paris (1993-1998). After 4 years within the Telecoms Finance team in Paris, he joined the Media & Communications Group at Calyon Americas in New York in 2002. From 2006 to 2007, he joined the Specialized Assets Securitization Group of Calyon Securities in New York. In 2007, he was appointed Head of Telecom Finance EMEA and then, in 2009, Global Head of TMT Finance at Crédit Agricole CIB in Paris. He set up in 2015 the Corporate Acquisition Finance group for which he assumed a global responsibility, before being appointed Global Head of Acquisition Finance and Advisory. In January 2019, he became Global Head of the Real Estate & Lodging group.
Stéphane Ducroizet graduated from the Hautes Etudes de Commerce (HEC) school of Paris.